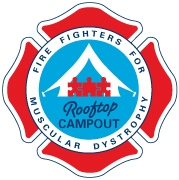 Al Bartley who has been involved with MD for forty-nine of those sixty years is camping out again this year.  Al says, “When I first got involved with Muscular Dystrophy there were 43 types of Muscular Dystrophy and people with Duchesne (a type of muscular dystrophy) would survive to 12 or 15 years of age. Now with improvements in medical research and scientific advances, people are living well into their 30s with an improved quality of life, including marrying, having children and going to university.”

There is a lot of research going on at the University of Manitoba and our own Dr. Louise Simard is part of that research team.

Money raised in Manitoba for MD stays in Manitoba. If you can help with a donation or give some time to assist with the road tolls it would be greatly appreciated.

Al Bartley and Rob Labossiere attended the Pensioners Breakfast where they kicked off the Rooftop Campout Campaign with a collection of almost $500. Thank you for the great start.

Check out the website and links below and please support your favourite camper or put a donation in the envelope being sent to the halls.

The success of this event depends on volunteers.  Members wishing to volunteer please contact Derek Balcean at 204.294.6784

Thank you from your Rooftop Team: