We lost Brother Barry Schedler to lung cancer back in 1999. Since then, UFFW led by President Forrest, has worked tirelessly to get specific cancers covered by WCB by having them legislated provincially through WCB as presumed to be work related.

His claim initially denied, UFFW never gave up on Barry and eventually won an appeal to have his cancer claim covered; this provided death benefits to his wife Jerrie and two children. This was the start of a very special relationship between Jerrie’s family and UFFW.

Last month, nearly 23 years after Barry‘s passing, a locker at 4 station was accidentally knocked over. The crew there had no idea whom the locker belonged to, and only knew it hadn’t been opened in a very long time. They took it upon themselves to cut the lock, and when they opened the locker,  found that it clearly had not been used in decades. Inside were various firefighting certificates, a few canned goods, along with a dress uniform hat and tie. The name on the certificates was none other than Barry Schedler.

The crew put the hat and tie on the memorial picture to Barry that has hung in the floor watch area the station for over two decades (as seen below.) They then contacted the Union and I knew just what should happen with those items. Rob Labossiere and I took a drive out to Stonewall and surprised Jerrie with this amazing find.

It was a very emotional & special moment to say the least. After a wonderful visit, Jerrie put the hat right up on the Family Christmas tree.

When little opportunities like this occasionally come up, we are always honoured to remind our extended fire fighter family that THEY ARE NEVER FORGOTTEN.

Merry Christmas Brothers and Sisters. Sincerely and in Solidarity. 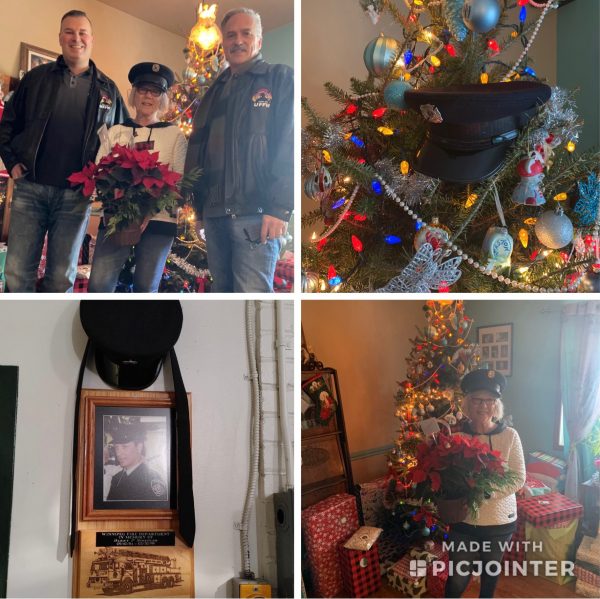