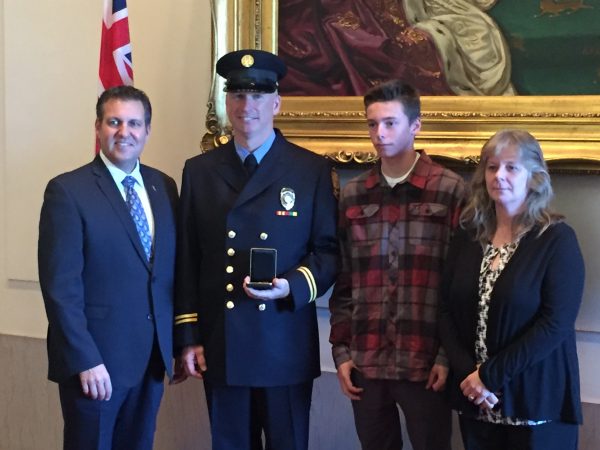 UFFW and its members are proud to acknowledge that one of our own received the 2016 Mary Beth Dolin Award on October 13 at the Manitoba Legislative Building.

The Mary Beth Dolin Meritorious Fire Service Medal was established in 1988 to honour individuals who have demonstrated excellence, leadership or outstanding achievement, or to those whose contributions have substantially enhanced the safety of people in Manitoba.

Mary Beth Dolin was a dedicated educator, school administrator and served as the Minister of Labour from 1981 to 1985. The award is named after Dolin to communicate her spirit of public service which exemplified the unselfish dedication to duty prized within the service.

Captain Robertson’s crew at station 17 nominated Jack for the award with support from the Manitoba Emergency Services College. Captain Robertson has worked on the advisory committee at the college and has been instrumental in program development, delivery, and evaluation.

Captain Jack was also actively involved in the development of a partnership between the Winnipeg Fire Department and Shaughnessy Park School in the North end of the city. Captain Robertson and his crew are role models for the kids in the neighbourhood, promoting positivity, the values of staying in school, all the while displaying the firefighter profession in fun and practical ways. We all know that these positive relationships are making a difference in the lives of the students he has mentored over the years.

In addition to Jack’s crew, the ceremony was attended by Shaughnessy Park School principal Dennis Mogg and teacher Tracy Chambers who are both vocal supporters of Jack’s initiatives.

Jack was joined by his wife Sandra, his son Travis, and his crew of Ryan Yackel, Derrick Hutchinson, Kris Rozolowich and Lauren Greschuk.

We would be remissed if we did not mention Jacks commitment and dedication to being our piper at countless firefighter funerals and events across the province.

Congratulations Jack. You’ve truly earned this award by demonstrating excellence, leadership and outstanding achievement to the fire service and the community you serve.