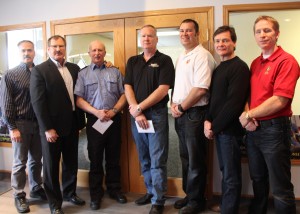 Media Event at the UFFW Offices

UFFW held a Media Event at their offices on Tuesday December 10th.  At that time they announced the new Public Relations Campaign that will feature all new videos that will appear on TV and on all Cineplex screens in the City of Winnipeg from now through the first week of January. View Videos  Featured in the picture above are UFFW Executive Board Members with Ed and Robert, who are featured in the new videos.

We also took the opportunity of announcing our exciting new website!